Generali “When I Drive”

Levi’s “Match Made In Levi’s”

Generali
“When I Drive”

Levi’s
“Match Made In Levi’s” 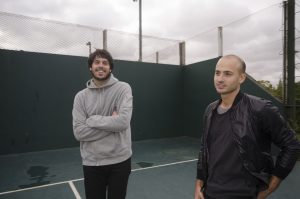 Clan is a filmmaking duo formed by Nicolas Uboldi and Federico Telerman. They write and shoot audiovisual content, creating an impressive body of work for both brands and fiction. Their visual style is between contemporary photography and psy-fi, backed up by a strong and epic storytelling.

They started working independently in the film and fashion industries until the year 2015, when they introduced themselves in advertising. Since then they have won several prizes such as The Grand Prix at Ojo de Iberoamérica and Best directors of Argentina at the same festival. As fiction and documentary filmmakers they have directed several short films such as A Conscious Dream, a road movie that portrays people’s dreams and journeys as fundamentals for their creatives processes. This film has won best short documentary at the Manchester Film Festival, among other prizes.

In advertising they have made campaigns for prestigious brands such as Johnnie Walker, Sprite, Coca-Cola, Levi´s, Movistar, Hush Puppies, Hoyts and Moëtt.