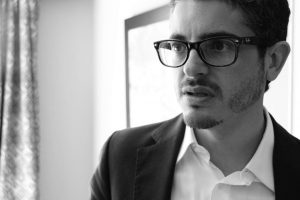 From very early on, Mexico City-born and raised Gabriel Govela knew that he wanted to be a storyteller.

While attending Universidad Iberoamericana, in 2001, Gabriel began working as an art department assistant for a small, independent film; it was there where he instantly fell in love with the set. From then on, he’s worked in advertising, making his way up from being a PA to becoming an editor and first assistant director for some of the best advertising directors in the world. He worked on global campaigns for Tecate, Volkswagen, and Budweiser.

In 2007 Gabriel co-founded “El Taller” a boutique animation and postproduction studio. There, he produced and supervised more than a hundred spots for Nestlé, Coca-Cola, Kellogg’s, and Nissan. As a way to maintain the balance between work and passion, Gabriel decided to use “El Taller” as a platform to create visual art and short films. He produced the documentary feature “Bering: Equilibrio y Resistencia”, and animated short films “Ventosa” and “The Spring” which he also co-directed. These pieces were widely acclaimed and awarded in the festival circuit; also exhibited in the Musee Quay Branly in Paris, Brooklyn Children’s Museum, and the National Gallery in Washington DC, among many others.

Turning into a live-action director in 2011, brought Gabriel together with corporations and agencies like BBDO, McCann Worldgroup, GREY GROUP, MullenLowe, KIA Motors, ExxonMobile, Kansas City Southern, SEAT, Mitsubishi, Pepsico, Bimbo, and Heineken. His work has been recognized in many festivals. He’s also directed short films, series, and episodic TV for TV Azteca. Many of his online films have gone viral, gathering record hits. Gabriel’s style is driven by his love for directing actors, impeccable storytelling, and strong visuals.

Gabriel is about to start the preproduction of his first feature film, “Zarzal”, which he also wrote.